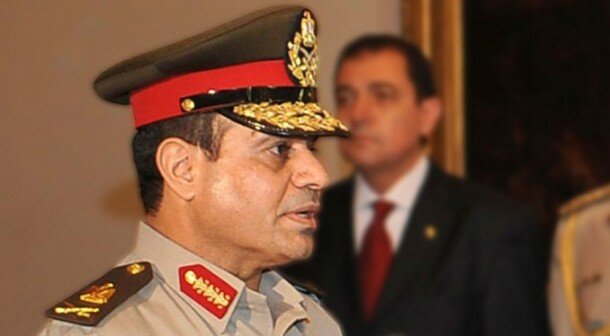 The Egyptian Armed Forces first declared, is still declaring and will always declare that it stands distant from political forces. The Armed Forces, based on its insightfulness, has been called by the Egyptian people for help, not to hold the reins of power, yet to discharge its civil responsibility and answer demands of responsibility. This is the message received by the EAF and heard in all of the country.

In turn this call was heeded by the EAF, and it has understood the essence of this message. Before it has come close to the political scene adhering to its responsibility, the EAF over the past month has inserted efforts, direct and indirect to contain the situation within and achieve national reconciliation among all institutions, including the presidency.

Since the past, the army has called for national dialogue, yet it was rejected by the presidency in the last moment. Many calls, initiatives followed until to date. The EAF similarly on more than one occasion presented a strategic assessment domestically and internationally, which contained the most eminent (this part unclear).

The EAF as a patriotic institution to contain division and confront challenges and perils to exit the current crisis. As we closely monitored the current crisis, the command of EAF met with the president on June 2nd where it presented the opinion of the AF on the state of (the country) and (relayed) the cause of masses and Egyptian people. Hopes were all pinned on national conciliation. Yet, the address of the president yesterday and before the expiry of the 48-hour ultimatum did not meet the demands of the people.

As a result, it was necessary for the EAF to act on its patriotic and historic responsibility without sidelining, marginalizing any party, where during the meeting a road map was agreed upon which includes the following:

Suspending the constitution provisionally; The chief justice of the constitutional court will declare the early presidential elections; Interim period until president elected. Chief Justice will have presidential powers; A technocrat, capable national government will be formed; The committee will offer all its expertise to review the new constitution; The Supreme Constitutional Law will address the draft law and prepare for parliamentary elections;

Securing and guaranteeing freedom of expression, freedom of media. All necessary measures will be taken to empower youth so they can take part in decision making processes. The EAF appeal to the Egyptian people with all its spectrum to steer away from violence and remain peaceful. The Armed Forced warn it will stand up firmly and strictly to any act deviating from peacefulness based on its patriotic and historic responsibility.

May God save Egypt and the honorable, defiant people of Egypt.