Do Some U.S. Senators Support Genocide? 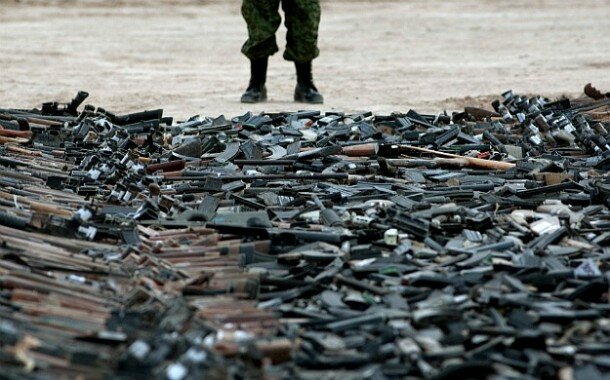 A first ever comprehensive international Arms Trade Treaty was approved by UN on April 3rd, 2013. The treaty seeks to regulate the $70 billion (46.2 billion pounds) business in conventional arms and keep weapons out of the hands of human rights abusers.

If the treaty is signed by President Obama, government agencies would review it before the administration decides whether to seek ratification by the Senate.

The Arms Trade Treaty is intended to prevent brutal dictators from acquiring conventional weapons including tanks, missiles, warships, artillery, and combat aircraft which they can use on their own people to commit genocide. Passage of this treaty has the potential to make some war torn regions more stable, reduce the flow of weapons to terrorists and reduce human rights abuses.

The treaty was passed in the United Nations by 154 countries with 23 countries abstaining. Only 3 countries opposed this treaty; Iran, Syria and North Korea.  It is an enormously popular treaty all over the world and has been carefully negotiated for several years to make sure it respects the rights of member countries. By looking at the popularity of it, one would assume that, if sent to the US Senate for ratification, it should pass easily.

However, those 3 countries are not alone in their desire to continue the flow of conventional weapons to brutal dictators. As it turns out, the National Rifle Association (NRA) and most Senate Republicans and at least one Democrat stand together in solidarity with Iran, Syria and North Korea.

Republicans ostensibly oppose this treaty because they claim it is an attempt to enact worldwide gun control measures that will eventually disarm the American people.

According to Senator James Inhofe, “The U.N. Arms Trade Treaty that passed in the General Assembly today would require the United States to implement gun-control legislation as required by the treaty, which could supersede the laws our elected officials have already put into place.”

Democratic Sen. Max Baucus, of Montana, also said he could not support the treaty, claiming it doesn’t do enough to “uphold the rights of Americans.”

Senator Inhofe and Baucus are seriously mistaken. The treaty clearly says it does not apply to gun ownership or sales within the member countries.

The treaty specifically states that it recognizes:

–       The sovereign right of any State to regulate and control conventional arms exclusively within its territory, pursuant to its own legal or constitutional system.

–       Mindful of the legitimate trade and lawful ownership, and use of certain conventional arms for recreational, cultural, historical, and sporting activities, where such trade, ownership and use are permitted or protected by law.

–       The inherent right of all States to individual or collective self-defense as recognized in Article 51 of the Charter of the United Nations.

You can read the full text of the U.N. Arms Trade Treaty here.

This treaty specifically does not apply to gun sales in the United States. It is carefully written so that it cannot be used to disarm anyone or restrict private gun sales within any countries.

Since the Arms Trade Treaty cannot restrict gun sales or gun ownership in the United States, what could be the real reason that the NRA and some US Senators oppose this treaty?

The fact is, the United States is one of the largest exporters of conventional weapons, accounting for 30 percent of global volume. American arms manufacturers profit greatly from selling weapons that eventually make their way into the hands of brutal dictators who use them to commit genocide. Anything that might reduce the sale of weapons will cut into the profits.

The NRA has long been known as a lobbying organization for the gun industry. Their one and only goal has been to boost gun sales and increase profits for the firearms industry. Similarly the most likely reason Senate Republicans oppose this treaty is because they want to protect the big arms producing companies who stand to lose money after the treaty is enacted.

So now you know why the NRA and some Senators have cozied up with Iran, Syria and North Korea against the rest of the world. These Senators aren’t taking a principled stand in order to protect anyone’s rights. They are working to protect corporate profits – even if it leads to genocide.