Detained For Silence: The Return of McCarthyism 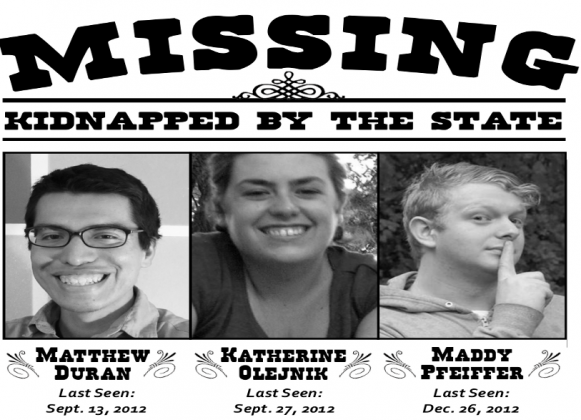 Civil liberties advocates are raising alarm over the treatment and detention of three Seattle area activists with ties to area anarchist collectives and the Occupy Wall Street movement. “The Grand Jury Resistors,” as they’re referred to by the area bloggers, have become subculture icons within the activist circles since their detention in September, for refusing to answer questions regarding their political affiliations and contacts.

The questions come purportedly as part of a larger federal investigation into the May 5th “May Day” protests, during which substantial amounts of property were damaged and vandalized.

According to Matthew Duran, Katherine Olejnik and Maddie Pfeiffer, all of whom are presently in solitary confinement at the SeaTac Federal Detention Center under (civil) contempt charges, the questioning and subsequent detentions are part of a greater effort by the federal authorities to crack down on activists and dissidents.

The FDC (Federal Detention Center) has declined to state to the press or to the lawyers of the detained, exactly why the three are being held in solitary. However, Brendan Kiley of the Seattle news site, “The Stranger,” notes in his most recent piece that their move from the standard pre-trial general population units to the Special Housing Unit (SHU), came after the publication of an article about visiting with Duran and Olejink in which they describe the events of the secret grand-jury hearing.

Kiley reports that during the questioning by the federal prosecutors, Olejnik was asked only four basic questions regarding the “May Day” vandalism. All the other questions were unrelated to the event and were mostly demands that she identify activists, their political beliefs and their social networks.

Despite having a verifiable alibi, placing her at her job in Olympia during the time of the “May Day” protests and no charges related to the investigation (or any at all) filed against her, it was her refusal to participate in what she calls a political “witch hunt”, landed her under lock and key. Shortly after their interview and the publication of Kiley’s article,” Olejnik, Duran and Pfeiffer were abruptly transferred from the general population into solitary confinement. Their access to everything from basic writing and correspondence supplies to communication with their attorneys were drastically reduced.

In a series of letters, published on the anarchist blog “nopoliticalrepression,” Pfeiffer states;

“My main frustration thus far has been that, despite my many requests, I have still not been able to call my lawyer. It has been more than a month and I have not even seen so much as a response to my requests.”

He goes on to state…

“Regardless of that, I am generally in good spirits and I am looking forward to the day when I can thank everyone, in person, for their support.”

Olejnik expressed similar frustrations, citing that the stationary and writing implements needed just to pen her correspondence were surprisingly hard to come by.

No one is absolutely certain why the three were detained without charge and held in solitary confinement, aside from their vocal political beliefs and affiliations and refusal to identify other activists. Human rights and civil liberties activists and advocates are asking more questions and demanding more answers against the backdrop of the National Defense Authorization Act (NDAA,) and the imprisonment of the Army Private Bradley Manning. The aspects surrounding the use of solitary confinement are raising new issues regarding the government’s treatment of political dissidents and those regarded as threats.

On the topic of solitary confinement, critics from the Left and Right often find themselves united, with Senator John McCain’s writings cited frequently;  “(Solitary) crushes your spirit and weakens your resistance more effectively than any other form of mistreatment,” echoing the cries of activists throughout the political spectrum.

Thursday, a rally is being organized at the court, coinciding with a scheduled hearing. A judge will hear arguments by the lawyers representing Duran and Olejnik, arguing that they should be freed if the state does not plan to charge them with a crime. The state’s apparent failure to coerce the detainees to answer unrelated questions after nearly five months without results, stand as grounds to release them. Citing numerous statements by the two declaring that they will not be “broken,” it may prove a hard sell for the state to justify keeping them detained for the full eighteen months allowed by the law.

Organizers of the event are calling for area activists to “Pack the courtroom for Matt and Kteeo,” as a sign of solidarity with the imprisoned activists. It is hoped that this demonstration will not only pressure the court to release them, but will serve to draw further notice to the increasingly aggressive nature of federal prosecutions in these times of political and social unrest.