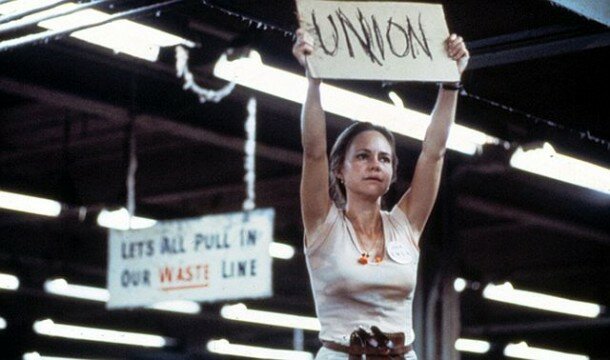 There has been quite a bit of talk recently, about the death of organized labor. With labor on its so-called “death bed”, perhaps now would be a good time to reflect on some of the things organized labor did for Americans in the 20th century.

A typical anti-union argument that people will often invoke is “unions were once useful, but they are no longer necessary.” With this argument, critics of unions are admitting that unions helped build the middle class by establishing the 40 hour work-week, the weekend, paid time off, increased wages and benefits, and increased safety in the workplace.

These observers instead argue that, since unions helped to enshrine many of these gains into American law, the unions themselves are no longer necessary. If one takes a closer look at the modern workforce however, we can easily tell that declining union strength has had severe consequences for American workers.

As the power of unions decreased over the past thirty plus years, the working class has suffered tremendously as a result. Since the 1970s, workers have increasingly been asked to work harder and accept less in return. In addition to the regression for workers that has taken place, they are also under assault more every day by business friendly politicians who seek to gut regulations designed to protect workers.

It is not uncommon today to hear politicians suggest weakening our child labor laws and workplace safety laws. Agencies like OSHA, MSHA, and the NLRB are under constant threat from the Right. Without a vibrant labor movement to protect labor laws, the advancements achieved by labor during the 20th century could easily disappear during the 21st.

One argument that you do not hear often from anti-union commentators is that unions harm their own members. The reason is because unions undoubtedly deliver for their members. While there are many legitimate critiques one can make against labor unions, no one can ever dispute the fact that unions are extremely effective in servicing and protecting their members. In fact, over 80 percent of union workers approve of the labor movement.

Numerous studies, evaluating the effect of unions on workplace, show that unions help workers tremendously in terms of wages and benefits. According to the Economic Policy Institute, the union wage premium-the percentage higher wage earned by those covered by a collective bargaining contract-is 13.6 percent (Mishel, 2012). What this means is that the workers who are members of unions, on average, get paid 13.6 percent higher than those who perform the same work but don’t belong to a union. In addition to getting higher take home pay, unions also deliver better health insurance policies and retirement options for their members.

In recent years the productivity of American workers has gone up at a record pace, while their pay has not. The chart below, from Madland and Bunker (2011) demonstrates this gap: 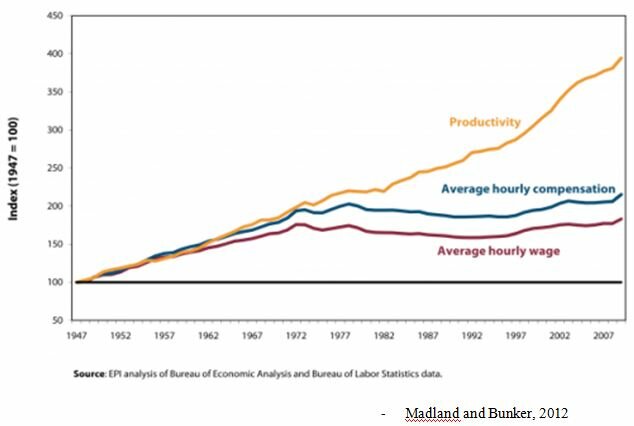 From 1947 through the early 1970s, when unions represented as much as one third of the overall workforce, wages and productivity tracked very closely together. When unions began to lose power in the late 70s and 80s, productivity surged while compensation stayed flat. Over the past 30 years, workers have not benefited from their increased workload. Instead, the gains in productivity have contributed to the ever increasing incomes of the upper percentage of earners, the owners of capital:

Over the past 30 years American workers have become ever more productive, yet their wages have hardly increased at all. In contrast, throughout the middle part of the 20th century—a period when unions were stronger—workers were rewarded for their productivity increases with higher wages on a roughly one-to-one basis, meaning that as they become more productive they received a corresponding increase in compensation. But this link is now broken. Between 1980 and 2009 nationwide worker productivity grew by 80 percent, while workers’ inflation-adjusted median wages increased by only 12 percent, which means that workers were compensated for only 15 percent of their productivity gains. If American workers were rewarded for 100 percent of their increases in labor productivity between 1980 and 2009—as they were during the middle part of the 20th century—then median wages would be $31.98 per hour, or 61 percent higher than the average real wage in 2009 (Madland, Walter, and Bunker, 2011).

It is no coincidence that America built the greatest middle class the world has ever known, in the years following World War II. A major part of the reason the middle class exploded in the late 1940s and into the 1950s and 60s was the growth and strength of the labor movement. As union density in the United States has shrunk over the past 30 years, the middle class has suffered greatly. The figure below shows as union density since 1967 has decreased, the middle-class share of national income has tracked closely with it: 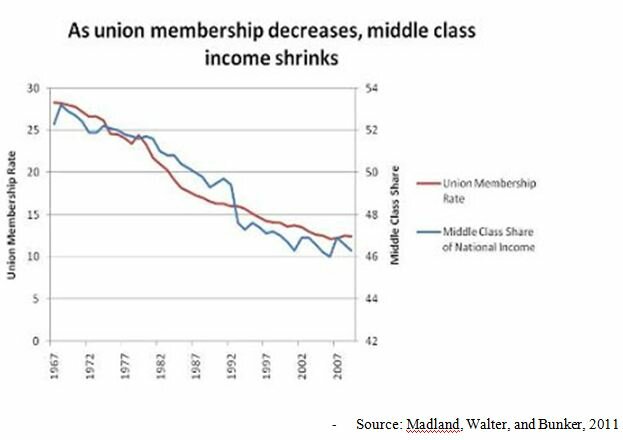 The close correlation between declining union density and declining middle class share of income is astounding. The relationship between these two makes it nearly impossible to refute the idea that unions are good for the middle class as a whole. As union power has eroded along with middle class income since 1967, incomes of the richest Americans have soared to astronomical heights. The decline of union power has directly led to the increase in the power of the very rich. According to the Economic Policy Institute:

The middle class weakened over the past several decades because the rich secured the lion’s share of the economy’s gains. The share of pretax income earned by the richest 1 percent of Americans more than doubled between 1974 and 2007, climbing to 18 percent from 8 percent. And for the richest of the rich–the top 0.1 percent–the gains have been even more astronomical-quadrupling over this period, rising to 12.3 percent of all income from 2.7 percent (Madland, Walter, and Bunker, 2011).

Strong unions have a spillover effect that helps the entire middle class. When employers perceive that unions could possibly organize their workforce, they deliberately keep wages and benefits close to union wages and benefits, in order to keep the union out of their workforce. This spillover effect is a clear example of how unions benefit even those who are not covered by a union contract. A recently released study by the Economic Policy Institute showed that declining unionization during the 1980s was a major factor in the increased income inequality seen since that time (McNichol, et al, 2012).

Unions also have a profound impact in the political arena. What unions lobby for do help all working Americans, not just their own members. “Unions enlivened politics by speaking out against inequality…these days, there aren’t big institutional actors who are making the case for greater economic equality in America” (Fletcher, 2012, p. 52).

Unions are instrumental in lobbying for increased spending to help the social safety net, increased funding for infrastructure, and increased funding for public education (both k-12 and higher education). Organized labor is often the only major voice advocating on behalf of the working class in the halls of Congress. If union political action were to disappear, there would be no large scale organization representing the concerns of working Americans. Organized labor has played a crucial role in lobbying for legislation that helps middle income Americans:

In 1965, the AFL-CIO played a crucial role in persuading both Democrats and Northeastern Republicans, whose districts were then home to tens of thousands of union members, to vote for Medicare, the Voting Rights Act, and anti-poverty programs. More recently, labor threw its weight behind the Affordable Care Act and the Dodd-Frank financial-reform law (Meyerson, 2012).

A strong labor movement can be the counter-balance against corporate greed and corporate control over politicians. During the 20th century, unions were directly responsible for the majority of the regulations and laws that protect American workers. FDR and LBJ did not simply give things away to working folks, the union movement forced them to! However, the fight is not over once the laws go into place. Objective analysis shows that unions also contribute greatly to the enforcement of labor laws (Mishel and Walters, 2003).

Fletcher, B. (2012). They’re Bankrupting Us! And 20 Other Myths About Unions.Beacon Press. Boston, MA

Meyerson, H. (2012). If Labor Dies, What’s Next. The American Prospect. Retrieved from: http://prospect.org/article/if-labor-dies-whats-next