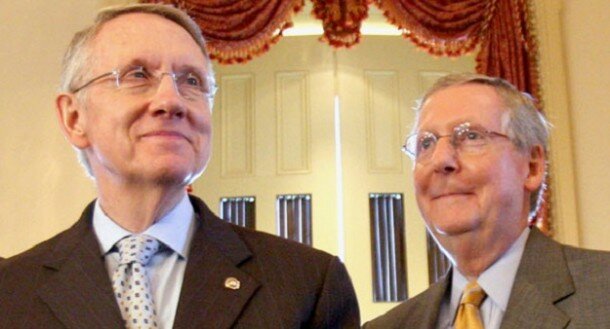 Look at those two. Happier than cochons in….well, you know. We’ve been bamboozled, people. Hoodwinked.

Just two days ago, there was dangled before us a little hope. Hope that our Democratic majority might finally pay off in the form of a functioning, accountable Senate.  Filibuster Reform.

Despite crushing pressure (so we were told), a loud, vociferous Left, and the insistence of Unions and sane people everywhere calling for change in the Senate, today, “Majority” “Leader” Harry Reid (D-NV) cut a deal with Minority Leader Mitch McConnell (R-KY), sideswiping the courageous efforts of Senators Jeff Merkley (D-OR), Tom Udall (D-NM), Tom Harkin (D-IA), Elizabeth Warren (D-MA) and others who championed and pushed for meaningful and real filibuster reform at the outset of the 113th Congress.  But, alas, the silent filibuster remains.  And with it, our dysfunctional Senate.

Elections should have consequences, win or lose. One of those consequences is that the majority party gets to be the decider on important issues. And since the President was just re-elected by a comfortable margin – and the “people” spoke, again – what of the President’s second term agenda?  What of “majority rule”?

Today, We, The People lost. Not Democrats or Liberals or Progressives. We.

Harry Reid has not only rubber-stamped this insane process whereby the minority has the final say in pending legislation, but he has also rewritten the Constitution.  The Constitution, which was carefully crafted to require a super-majority only in very specific, enumerated circumstances (treaties, impeachment, overriding a Presidential veto, amending the Constitution and expulsion of a Congressional representative).  Overriding a Presidential Veto and Amending the Constitution require 2/3′s of both the House and the Senate. That’s it. These are the only instances where majority rule is not the “law” in this country. Instead, our Senate remains ruled by fear. Fear emanating from the bald spots of the old-school, immovable, institutional crusties like Chuck Schumer, Dianne Feinstein, Barbara Boxer, Carl Levin and Pat Leahy. Terrified of….what, exactly? That they may one day be in the minority? Have they listened to anything? They had us at “talking filibuster”.  They had the overwhelming support of the people.

Reid, who classified this debate as a “headache”, would like to try and convince us that this was about making our Senate run more efficiently. Nonsense. What this is about is having our leaders – term used loosely – stand up there in front of us all and answer the question: WHO DO YOU WORK FOR? We need to know. Do you work for We, The People?  Or is it the gun lobby?  Big oil?  Your own self-aggrandizement?  Next election cycle?  And what sort of majority refuses to use its power?

Here’s an idea:  the Constitution says that Congress can set its own compensation (nothing about those expensive medical and other benefits, of course), so, why don’t we say that every Federal office-holder can choose to receive his or her regular salary and benefits from the Federal government, or, can opt instead to receive $1 annual salary from We, The People’s tax dollars and then be paid by their lobbyist of choice – with full transparency.  At least this way we’ll know who is working for whom.

Since the filibuster controls which laws our Senate can even vote on, say farewell to these big-ticket items that will now be relegated to the recycle bins of a Presidential Agenda:  gun legislation, any climate change measure, immigration reform, judicial appointments.  And on and on.  It is more than relevant to note that this knife in the back of progress comes on the same day that Senator Feinstein introduced the gun legislation she is sponsoring in the wake of the Sandy Hook massacre.  I wish that DiFi, who would not support the Merkley-Udall filibuster proposal, would let us all know how she plans to get this package of gun reforms passed at this point.  Because the Majority “Leader” and his NRA “B” rated self just shot his caucus in the foot.  No pun intended.  Actually, direct this answer to the parents of those children who were just brutalized and slain.

For those asking, here is a partial list of the main Democrats who stood in the way of filibuster reform.  I am embarrassed to see both of my CA Senators (one of whom likes to call herself a Progressive) on this list:

One last thing, Harry (and all who, behind closed doors, fecklessly supported him on this):  you have lost your right to ever, ever, ever again utter the words “Republican Obstructionism”.  First time we hear it out of your mouth, we will start a National Shame Project.  We’ll just let you figure out what form that may take.  Signed:  We, The People.