Official death toll has been lowered this morning to 24 as emergency crews continued to search for survivors in the rubble of homes, schools and a hospital in Moore, OK, ravaged by a powerful Monday afternoon tornado.

According to The Weather Channel, the storm was a mile wide and classified as an EF4, the second-strongest type tornado with winds of 166 to 200 mph.

Elementary schools, homes and a hospital were among the buildings leveled in Moore, leaving 55,000 residents of the town stunned and devastated. Many residents are left without power and water.

One of the many buildings totally destroyed was the Plaza Towers Elementary School which took a direct hit. The Oklahoma City Medical Examiner’s Office confirmed seven students were found dead in a pool of water inside the school. According to local news reports, the tornado tore the roof off the building about 3 p.m. local time.

NBC station KFOR reported that the students in fourth, fifth and sixth grade were evacuated to a nearby church, but the students in lower grades had sheltered in place. Some of the students had been in a hallway when the twister struck, others in bathrooms.

Gov. Mary Fallin said today that her state will rebuild, and she asked for prayers to aid the rescue and recovery. 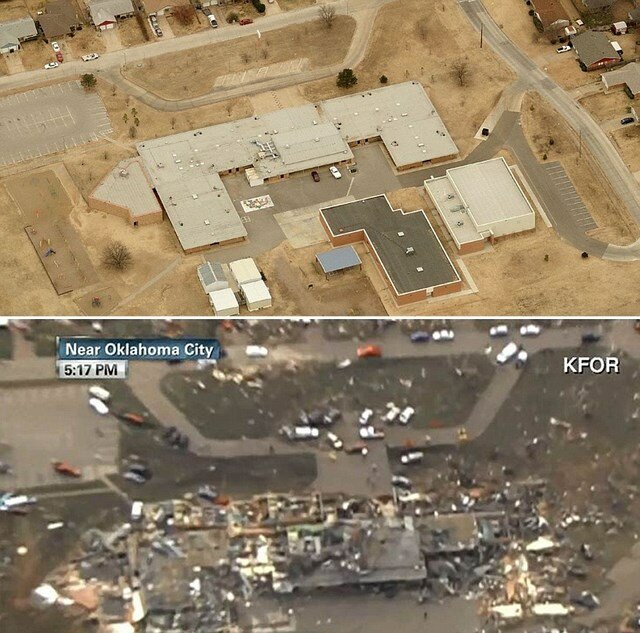 Plaza Towers Elementary, before and after the tornado destroyed it on Monday in Moore, Oklahoma.

Last reply was 3 days ago