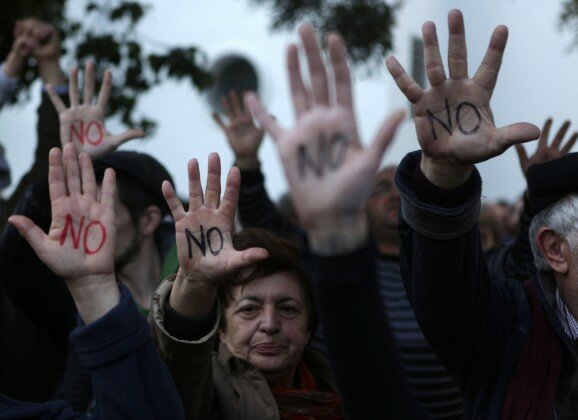 The Cypriot Parliament has voted unanimously to reject the negotiated E.U. bailout package, offered last week. The vote, cast yesterday at 4 p.m. GMT (11 a.m EST,) was taken by hand, with 36 voting against the measure, 19 abstaining and none voting in favor. The widely unpopular bailout proposal, which included a 10% levy or “haircut,” on deposits nationwide, led to long lines at ATMs nationwide, while also inspiring protests throughout the country..

News of the decision has sent shock waves through the already troubled European Union as worries over a possible collapse of the Cypriot financial sector troubled their neighbors. Prior to the vote, Cypriot President Nico Anastasiades have confided to German Chancellor Angela Merkel that he was already aware he lacked the political capital to see the bailout approved, and knew it would fail. Jeroen Dijsselbloem, chairman of the Eurogroup of finance ministers, stated that despite of the Cyprus’ decision, the bailout package remained on the table, but noted that it did so with the original conditions.

For years Cyprus has acted as a European version of the Cayman Islands, serving as a tax haven for large offshore multinational businesses and wealthy individuals. Roughly half of Cypriot bank accounts held by non-resident Russians. As the news spread, every airline ticket between Moscow and Cyprus has sold out. This lead many throughout the already wary E.U. member states to question the general sustainability of the Cypriot financial sector, which is suspected to be involved with Russian money laundering.

Word of the impending potential “haircut” had Cypriots lining up at ATMs for several days, fearful that their accounts may be hit. Tensions were high throughout the country as account holders scrambled to withdraw their money. Throughout the morning, on the day of the vote, twitter was abound with Cypriot tweets about closed banks, money deliveries and confrontations with bank staff. Banks themselves closed voluntarily to avoid a run on available cash.

The potential ramifications of a national bankruptcy of Cyprus are significant and reach beyond the small nation’s own borders. Russia, who has considerable interests in Cyprus, warned that a continued rejection of the bailout terms and resulting bankruptcy could lead to a total collapse of the Cypriot financial sector. Other countries in EU such as Spain and Portugal are edging closer to needing their own bailout packages, and those such as Greece which has received several bailouts, are still struggling to get back on their feet.

When pressed by reporters as to why Parliament rejected the deal, President Anastasiades quipped that they (Cypriots) “had their own plans” for dealing with the crisis. Though those “plans” were not eluded to any deeper explanation.

Members of Parliament offered suggestions throughout the debate on how to make the deal more palatable to the nation, including an adjustment of the “haircut,” which would have left any with under 200,000 Euros untouched, however even those were rejected. Public reaction throughout Cyprus has been generally supportive of Parliament, calling the Euro Group deal “theft,” and “blackmail.”

Through twitter and social media and out in the streets, where demonstrations came out in force against the bailout terms, Cyprus was on edge throughout the day. When news broke that Parliament had rejected the deal, many Cypriots celebrated, considering it an act of sovereignty in the face of economic extortion.