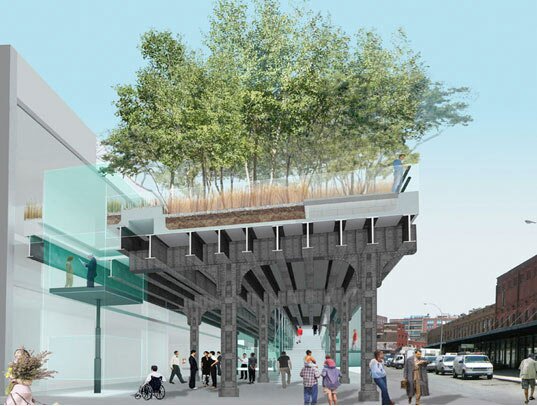 Sustainability is an overwhelming amorphous goal on a global, national, or regional scale. However, when it is broken-down to small areas and focused projects, it becomes real and tangible. Instead of grand plans, little ones can be made which may have a fractal or ripple effect on the region in which the project is located.

This above statement is the essence of an  “island of sustainability” (Walner et al.). Specifically, the term refers to the redevelopment, usually through a public/private partnership, of a designated derelict area into one that enhances the physical environment. It could be the redesign of an area to be an open space, a park, an urban farm, or mixed-used energy efficient land use, embodying some of the elements of sustainability.  In many of these developments there is an emphasis on public transit with bicycle- and pedestrian-friendly elements.

A precedent of the concept of “islands of sustainability” is that of the mix of incrementalism, pragmatism, and sustainability championed by Jaime Lerner in his vision for Curitiba, Brazil. He saw abandoned quarries, derelict areas, and resolved to change things despite the tumultuous times in Brazil when he was mayor of Curitiba.

He transformed the city gradually based on a grand plan/vision which has been realized so that this city has become the model of a sustainable city. But, Curitiba would not be such a model if it was not for Lerner’s sometimes audacious outlook of not following what had been done previously, and by involving the citizens, business, and industry into the process (Phillips). (For a comprehensive view of the development of Curitiba, I recommend Urban Brazil: Visions, Afflictions, and Governance Lessons by Dr. Ivani Vassoler-Froelich.)

Many cities which once were at their peak in the industrial revolution were left behind by the structural global economic changes resulting from the shift from the Industrial Age to the Information/Hyper-Globalism Age. This led to large areas of derelict urban landscapes, such as found in Detroit, Gary, Milwaukee, the Ruhr Valley, and other industrial centers in Europe (i.e. London, Manchester, Liverpool, Birmingham etc.) The only solution leading away from further decline is the transformation of these areas in congruence with the emerging sustainability paradigm.  These cities will never be the centers of industry. Their day is gone.

Stakeholders (including the general public) in these stressed cities have begun to think large and pragmatically. Unfortunately, they are confounded by the global malaise that is promoted by a significant and influential elite which cannot go beyond a mindset that is built on a 19th century concepts of economics and politics. The conflicting of modern/post modern and the sustainability paradigms is a contributing factor in the transition of  these cities into their new future.

Examples of ‘islands of sustainability” as found in Milwaukee, Wisconsin and New York City:

The Menominee Valley in Milwaukee, Wisconsin was once the port area of the city (docks, railroad yards, industry etc.) When transportation on the Great Lakes decreased and industries were made obsolete because of structural changes, the area became a wasteland (Geruda). Due to a major push by one of the most innovative U.S. mayors, John O. Norquist, who now is the CEO for the Congress for New Urbanism, efforts were made to acquire Federal and State funding to assist in its revitalization and to develop the atmosphere for cooperation between the public and private sector.

The culmination of these efforts was the formation of a non-profit organization; Menominee Valley Partners, Inc.  which presently functions as a liaison between the public an private sector and is the implementation body for the revitalization plan. Now, the area has parks planted with native species, a nature trail, new sustainable industry, and a center for ecology. It is a major recreation destination with over ten million visitors annually. The redevelopment has been recognized by the Sierra Club as being one of the top ten in the nation for sustainability.

The High Line in New York City was an elevated railroad for freight until the 1980s. The railroad was elevated to prevent accidents between vehicles and trains in the early 1900s.  However, as the truck industry started to carry more freight in the 1950s, the need for the railroad declined and was derelict by the 1980s. The Friends of the High Line worked with the City of New York to create a unique linear elevated urban park. (The featured  image above is an artist’s  rendition depicting a portion of the park.)  The first section was opened in 2009 and the second section in 2011. The park offers tours, art education, gardening exhibitions and open space for a dense urban area previously undeserved by parks. (I would like to express thanks to a colleague for alerting me of the latter redevelopment/regeneration project.)

In the present political and economic environment in the world today with shrinking funds for national or supra-national (i.e., European Union) for urban areas, it often seems that goals such as sustainability, economic redevelopment, job creation, environmental justice and decreasing income inequality are being sacrificed to austerity measures.  However, it cannot suppress the grassroots Progressive movement to mold cities by the general philosophy of sustainability. The idea of “islands of sustainability” is a vehicle for promoting sustainability on a local scale which may seem minor, but could have the potential to change the world.