Posted by Guest Author on Thursday, February 14, 2013 · Leave a Comment 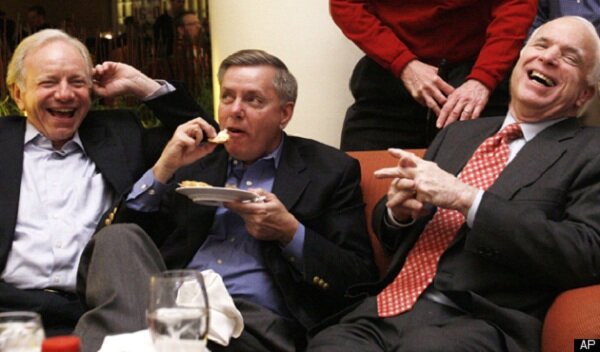 The most powerful people in Congress aren’t elected.

News programs report on groups of Representatives and Senators examining witnesses.
Those sessions are usually comfortable and polite. Sometimes, they’re not. Those are congressional committee hearings.

Constitutional Authority
The Constitution doesn’t mention committees per se, but they are constitutional. Article I, Section 5, Clause 2 gives each chamber of Congress – the House and the Senate – the power to make its own rules of procedure. Congress did that by creating committees, each of which handles the issues that fall within its subject matter. Congressional committees do most of the work in Congress and are very powerful.

4 Joint Committees
The two houses of Congress maintain four joint committees on the economy, the Library of Congress, printing, and taxation.

Composition and Structure
The House Speaker and Senate Majority Leader – currently Rep. John Boehner(R-OH) and Sen. Harry Reid (D-NV) – appoint the committee members. House members serve on one committee; Senators serve on three or four. Members can request committees in which they’re interested. Those with the most seniority are likely to get what they want.

Members of both political parties sit on each committee. The member from the majority party with the most seniority usually serves as chair. Committee seats go to parties in the same proportion that the parties have in Congress. So Democrats hold about 55 percent of each Senate committee and 46 percent of each House committee seats. Republicans hold the remainder – 45 percent Senate and 54 percent House. Each committee also has a few sub-committees to help manage the work load.

Advise and Consent
The Constitution’s Article II, Section 2, Clause 2 requires the Senate to advise the president on and consent to certain nominations to public office and to treaties with other nations. That’s why we see Senate committee hearings on the president’s nominees for cabinet secretaries, federal judges, and other positions. The Senate Foreign Relations Committee recently concluded its hearings on former Sen. John Kerry’s nomination as Secretary of State. The Armed Services Committee has been holding hearings on Charles Hagel’s nomination as Secretary of Defense. The Judiciary Committee handles nominations for the Attorney General and for federal judges and prosecutors. After a committee sends a nomination to the full Senate for a floor vote, then all senators vote either to confirm or deny the appointment. The treaty process works the same way.

Budget
Each committee reviews, adjusts, and approves or denies budget requests and appropriations for the federal programs and agencies that fall within its jurisdiction.

Oversight
Committees review the performance of the Executive Branch departments and agencies to find out exactly how they are doing their jobs.

Legislation
Every bill introduced in Congress is numbered (HR 123, S. 345, etc.) and assigned to the appropriate committee. More than 6,000 bills are introduced to every Congress.

Ad Hoc
Congressional leaders create temporary committees as necessary. When the House and Senate pass different versions of a bill, a conference committee of representatives and senators from each relevant committee, and both parties, settle the differences.

Committee Hearings
Dozens of hearings occur every day, so hearing rooms consume plenty of space in the Capitol complex. Committees hold hearings when members want information about a bill, nominee, treaty, budget request, or oversight issue that they’re considering. They can invite – or subpoena – experts, ordinary citizens, government agency employees, and others to testify.

Witnesses swear to tell the truth, and perjury carries criminal penalties. The bits of hearings that we see on television are usually the controversial or contentious ones, but the vast majority – the ones we don’t see – are quite mundane.

Hearings are usually open to the public and transcripts are available. Look at each committee’s website for schedules and ordering information.

Committee Staff
Members of Congress have arduous workloads and grueling schedules. So they rely heavily on committee staff people. Staffers write most of the legislation in Congress. They read and summarize bills, meet with lobbyists and the public, arrange hearings, conduct research, and update committee members on issues and events. Members don’t have time to read every word of every bill, so they base their decisions on those summaries. Committee staffers are probably the most powerful group of people in the Capitol.

Watch a Hearing
I’ve testified at committee hearings at all levels of government, and it’s a profound experience. Committee websites post summaries of their hearings online. You can watch hearings – live or recorded – on C-Span. Spend a few minutes with them. It’s worth your time.