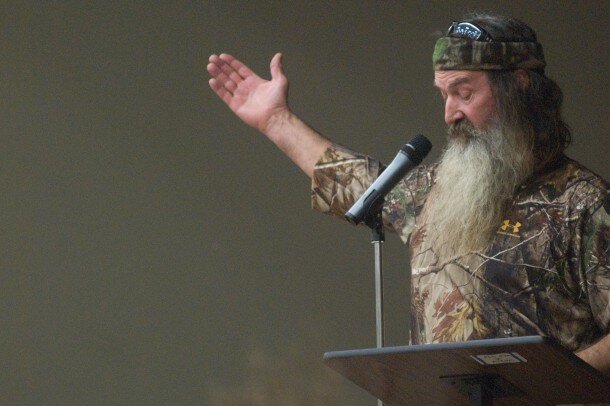 Here’s the gist: with the Phil “Duck Dynasty” Robertson controversy over homophobic and racist comments in a recent interview with GQ Magazine, it is private “hate speech”, not public “free speech” that we are dealing with; there is a monumental difference. How is it that the First Amendment is so universally misunderstood?

I’ve read it all over the last day: “Phil is just speaking his mind!” “Phil can say whatever he damn well wants because of the First Amendment!” “Phil’s being punished for agreeing with the Bible!” (my personal favorite); “Just because Phil slammed a special interest group…..SMH!” “This is not what our Founding Fathers meant when they said free speech!”

First. Gays and lesbians are not a “special interest group”. Nor are they half as concerned with their own sex lives as are avowed homophobes, apparently, who just love to talk about gay sex. It’s always about sex for the Phil Robertson’s of the world, as if there is no other component to a relationship.

Next – those Founding Fathers we like to throw around so much? They intended to forever guard against government intrusion, even oppression, into the free marketplace of ideas. Speech is “free” in this country, meaning, however vile or stupid or offensive or pathologically ignorant, you can print it or say it without fear of imprisonment or government interference (let’s leave the many “time, place, and manner” legitimate government restrictions to this free speech for another post – this concept is already far above and beyond the comprehension of RWNJ’s as it is). For a perfect example of this, see Westboro Baptist Church.

Now. Let’s parse it out a little further. What Russia is doing with the Sochi Winter Olympics? This is violative of free speech – and goes well beyond Winter Games. Vladimir Putin and the Russian government passed anti-propaganda laws in June; these archaic and oppressive laws are a direct shot at its gay and lesbian citizenry, who may be imprisoned and fined. For being gay in Russia. In the year 2013. THIS is infringing on free speech. Russia imprisoning members of the band Pussy Riot for “hooliganism motivated by religious hatred or hostility” is infringing on free speech (a pattern seems to be evident with our friends, Russia….). Phil Robertson being placed on an indefinite suspension (note: he was not even fired outright) because of bigoted, racist remarks is NOT.  See the difference?

Television “stars” don’t have a right to express any damn opinion they’d like.  And keep their jobs.  Please note: no government official is attempting to fine or imprison Phil Robertson (this act would clearly violate his rights).  Do you think any “reality” television personality would survive being publicly quoted in a major magazine, discussing vaginas and anal sex?? Give me a break. Or, imagine if Adam Levine, a judge on “The Voice” who considers himself Jewish, in an interview with a widely read magazine, hauled off on Christians as a stereotype. Maybe he says something like “bible-thumping, inbred hillbillies who should be tossed back into the Roman Coliseum with the lions”. Guess what? Adam Levine would, and should, be fired in a nano-second.  What if Ashton Kutcher called Muslims “dirty towelheads”?  You get the point (hopefully) that these are offensive and unacceptable things to say.  Just like we, as private citizens, can’t walk into our office, get in our co-worker’s face and call him or her a fat, lazy slob and expect to have a job the next day. This is not what we mean by “free” speech.

Private people – even “dynasties” – have no, read NO, “right” to speak or to print vile, offensive or moronic speech wherever and whenever they wish without natural consequences and response from other private people (or, dynasties, such as A&E Networks, who are owned by Hearst and Disney). You see, Governor Jindal and Ms. Palin, we too have rights here as private people. The right to not watch, listen to or read the moronic-hateful-ignorant crap that spews out of your pie holes like volcanic ash from the Dark Ages. Jindal is so confused with his own comments. We are talking about a “reality” show. For entertainment purposes. Not “Crossfire” or some other news panel where differing opinions on particular political issues are expressed through various viewpoints. Even if it were, it is still a private, not governmental, enterprise, and people get fired or suspended from these programs all the time for saying something offensive or just plain dumb. A recent example of this, ahem (oh, the double standard….wait for it), is what happened when MSNBC host Martin Bashir, responded to Sarah Palin’s comparison of the federal deficit to slavery, no less, and called the half-Gov a “world class idiot”. As Megyn Kelly would say, this is a “verifiable fact”. However, appropriate outrage from all sides ensued, and, Bashir was immediately forced to resign. Would someone please tell me, at any rate, why we still give a rat’s fuck what Sarah Palin has to say? She is irrelevant. Bashir’s mistake was giving her comments any credence whatsoever.  At this point, she’s like a Kardashian. Only far less entertaining.  NEXT.

Speaking of M.K., her comments about White Jesus and White Santa were simply stupid. Dumb. Blonde. Ignorant. Asinine. Whatever. They do not rise to the level of what Phil Robertson said, and, guess what? Megyn (with a “gyn”) works for a renowned denier-of-facts faux news program. So everything that comes out of her mouth is taken with, shall we say, a shaker of salt.

Let me give you another analogy. Say I’m arguing with someone. And I start to walk away. You can’t make me stay and listen just because you have the right to “free speech” in this country. But, then again, unless you’re threatening my physical safety or trespassing or otherwise breaking any law while “speaking”, I can’t call the police on you, either. No matter how much I may be offended by what you’re saying.

Hateful, bigoted, ignorant speech cloaked in the Bible is still hateful, bigoted, ignorant speech. And it will be met with the full force of the tolerant and forward-thinking community.  I give little (no) absolution to those who live most of their lives as unproductive members of society – reprobates – who then “find Jesus” or religion and promptly set out to cast stones and judge others for the rest of their natural lives because “the Bible says…..”. Phil Robertson does not get a pass because of where he was raised, the era he grew up in or what god he worships.

All of this – all of it – seems to be a by-product of our declining public education. Of evolution deniers. Of Civics classes not being taught (or, taught properly and up to standards……better yet, of Civics classes in Texas differing so drastically with Civics classes in California, by way of example). It is also a product of three-fourths of the country moving toward equality and progress, as the rest remain stuck in neutral, or jammed in reverse.

Team Phil? Ok. So long as you know why and can own it. Because you either agree with Robertson’s comments, or, you do not understand the nature of why they are inherently unacceptable (see, all of the above).