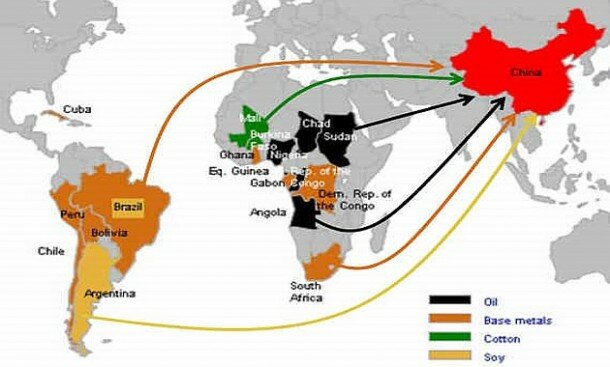 According to China Times Magazine, China will replace the European Union as South America’s most important trading partner by 2015. Currently, Asia accounts for more than 25% of South America’s total trade.

With poverty levels dropping to their lowest in 20 years in the region, Latin America is fast becoming an open market for both investors and consumers. As Europe and USA battle with political and economic turmoil, they are falling behind in taking advantage of South America’s ongoing development.

In addition, China’s swift industrial growth is causing the country to be in a perpetual quest for natural resources such as copper, iron ore, soybeans and oil. China has been in bilateral trade with Africa for natural resources since the early 2000s. Although that trade continues to grow at an extraordinary pace, China has been working on expanding its economic relations with Latin America.

Because China’s interest has been seen as almost purely economic and therefore a welcome change from American political influence, trade relations between China and Latin America have been booming for a decade.

China has been utilizing financial “aid” in return of guaranteed access to certain natural resources or in the case of financing of construction projects, with the condition of Chinese companies undertaking the projects.

Asia Times report that, in 2009, China lent Brazil $10 billion in exchange for future oil shipments. In 2010, China advanced $20 billion to Venezuela to pump oil from the Orinoco Belt block and lent $10 billion to Argentina to renovate its aging railway system. Smaller loans have gone to other countries. China is the largest export market for Brazil and Chile, and comes in second with Argentina, Colombia, Peru, and Venezuela.

Kevin Gallagher, an international relations professor at Boston University who co-wrote a book on China in Latin America, says “It’s a real opportunity for Latin America if they play it right and it’s a real challenge to the U.S. The Chinese are a kick in the pants for the United States to articulate a little bit more of a serious relationship with the region.”

Latin America and China also share cultural ties through Chinese immigrants whose presence in the region dates back to 400 years. Central and South America boast significant Chinese populations. Cuba has long maintained economic and military ties to China as well.

China acquired many assets in Latin America at bargain prices during the global financial crisis of 2007–2008. The country seized this opportunity to win influence and goodwill for investing in the region at a time in which Western investors were not.