Bulgaria: Third Man Dies after Self-immolation, Against the Austerity Measures 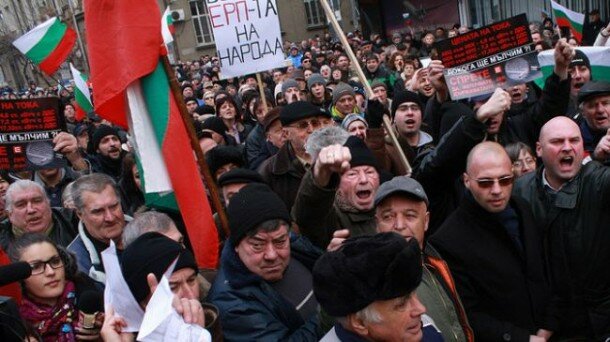 A third Bulgarian man died today from self-immolation injuries. He set himself on fire on February 26, as a protest against the rising poverty, unemployment and corruption in the EU’s poorest country.

53-year-old unemployed father of five, Ventsislav Vasilev, had doused himself with fuel and set himself ablaze outside the mayor’s office in the central town of Radnevo.

Last month, amid the increasing protests against corruption, cronyism and poverty, another protester, 36-year-old Plamen Goranov, set himself on fire outside city hall in the eastern city of Varna, causing the country’s right-wing government (GERB party) to resign on February 21. He died from his injuries in hospital on March 3.

If opposition parties can’t agree on a new government, the country might face early election as soon as April which analysts say could produce a stalemate like those that have clogged up reforms in neighbors Greece and Romania.

The continuing protests against the government austerity measures began with the symbolic burning of electricity bills in Blagoevgrad in January. The International Trade Union Confederation said the austerity has caused “catastrophic social consequences” and stagnant wages.

Protestors initially demanded the renationalisation of private regional energy monopolies, the removal of subcontractors and stopping endemic corruption, but their demands developed into broader opposition to the governing center-right GERB party.

As the ruling parties of European nations insist on strict austerity programs, to win investor trust to repair their economies, they risk being ousted from power by voters fed up with cost cutting and belt tightening. Bulgaria’s latest turmoil could mean more trouble for derelict neo-liberal policies of the European Commission, the International Monetary Fund (IMF) and the European Central Bank.

Two other ex-communist members of EU, Slovenia and the Czech Republic also pursued aggressive austerity programs which have deepened the painful recessions and driven jobless rates to record highs.

Disruptive cycle of austerity that kills growth and budget revenues can prompt an even bigger squeeze to the already suffering public and could push voters towards the edges of the political spectrum.

For example in Czech Republic and Greece, anger over austerity has lifted the Communists to second place in polls.

Some politicians, such as the Prime Minister of Hungary Viktor Orban, have strayed from the usual neo-liberal script of reforms embraced by most EU governments, imposing Europe’s highest bank tax and targeting foreign owned utilities and retailers to boost budget revenue.

The Bulgarian crisis might prove a case study for destabilization in the post-communist transition model of Eastern European countries such as Bulgaria into Western-style neo-liberal economic systems.