Berlusconi Sentenced to 7 Years for Paying a Minor for Sex 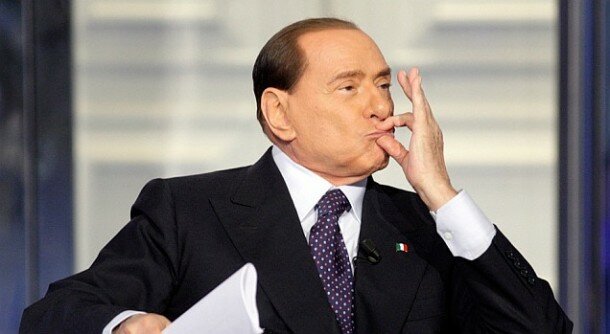 After 50 hearings spread over two years, former Italian Prime Minister Silvio Berlusconi was found guilty on Monday for paying a minor for sex and abuse of power in office. The Italian media mogul and three-time prime minster was sentenced to seven years in jail and banned from public office for life.

A panel of three female judges sentenced the 76-year-old billionaire, playboy politician, to jail for compensating Karima el Mahroug, a Moroccan-born dancer, for sex at his mansion outside Milan in 2010 when she was 17. According to Italian constitution, paying a minor for sex in Italy is illegal.

Karima el Mahroug who is also known as “Ruby the Heart-Stealer,” was invited to Berlusconi’s so-called “bunga bunga” parties many time as a dancer first, where some witnesses reported female guests would striptease and were fondled by Berlusconi. The witnesses said aspiring show girls performed striptease acts as sexy nuns and nurses, but also cross- dressed as President Barack Obama time to time.

Additionally, Berlusconi was found guilty of helping Mahroug escape justice for theft. The teenager was arrested on suspicion of theft same year, and Berlusconi used his position as prime minister to pressure the police to release Mahroug into the care of one of his associates, rather than allowing her to be placed under the supervision of local authorities.

Berlusconi, 76, will remain free for now and be allowed to participate in politics while he appeals the verdict handed down by a panel of judges in Milan. Berlusconi will be able to push for two appeals against the sentence as allowed under Italy’s three-tier legal system, and will not serve any jail time until a final verdict is handed down by Italy’s Supreme Court, which could take years.

Berlusconi’s attorney Niccolo Ghedini described the sentence as “hallucinatory”. Many aides and associates of Berlusconi denied the reports about the “bunga, bunga” parties and told the court that the parties were well-mannered get-togethers where guests kept their clothes on.

Currently Italian government is made up of a coalition which includes members of Berlusconi’s Freedom People (PDL) party. Berlusconi had said he would continue to back the coalition government even if he was handed a guilty verdict.

Former PM’s legal woes do not end with “bunga, bunga” parties. He is also under investigation for allegedly bribing a senator to join his party and a final ruling from the Italian Supreme Court is expected on a four-year sentence he has already received for tax evasion. The tax-fraud case is heading to Italy’s highest court for a final appeal after Berlusconi’s defense team failed to stop it last week at the constitutional court.