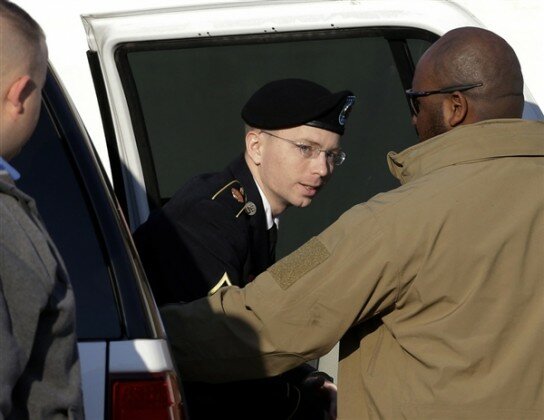 Following U.S. Army Private Bradley Manning’s partial plea to the charges that he illegally released classified documents, in what is being described as the largest leak of classified U.S. Government and Military information in U.S. history, members of the Icelandic Parliament, Swedish “Pirate Party,” and other foreign dignitaries are offering praise for Manning by nominating him for the Nobel Peace Prize.

Manning, who has been incarcerated without charge for over 1000 days, entered a partial “naked plea” to the court on February 28th. He read a prepared statement in which he described in depth, his duties as an intelligence analyst with the Army, how he came into possession of the leaked information and what led him to release it to Wikileaks.

In his statement, Manning confesses to leaking the information to the Wikileaks, after careful consideration of both his own reasons for doing so and the consequences he could face. Reporting to have first offered his information to the Washington Post and New York Times, he states that neither expressed genuine interest, and that his ability to speak directly to anyone with the authority to publish the information he had at his disposal was hampered by a variety of factors including weather, automated phone systems and internal editorial channels and hierarchies.

Having participated in Wikileaks or (WLO) chats and discussions previously on the organization’s website(s), Manning states that his decision to release the SigActs (jargon for Significant Activities) tables to Wikileaks came after an abandoned attempt to contact staff at Politico and  following extensive internal deliberation as to what kind of reach and affect their publication may have.

In the thirty five page statement, read aloud to the court during the entering of his plea, Manning describes how during a stay at his aunt’s Maryland home while on leave, he reached out and made contact with Wikileaks activists via Internet Relay Chat, or “IRC,”

“At my aunt’s house I joined in on an IRC (internet relay chat) conversation and stated I had information that needed to be shared with the world. I wrote that the information would help document the true cost of the wars in Iraq and Afghanistan. One of the individuals in the IRC asked me to describe the information. However, before I could describe the information another individual pointed me to the link for the WLO (wikileaks organization) web site online submission system. After ending my IRC connection, I considered my options one more time. Ultimately, I felt that the right thing to do was to release the SigActs.”

As the debate over Wikileaks and Private Manning’s data releases continues to intensify around his recent plea, arguments over whether he is a hero, a traitor, a whistleblower or a show-boater continue raging throughout social media. With Twitter, Facebook and the blogosphere all ablaze with opinions, many in positions of power are now chiming in, largely expressing support for the twenty five year old Army Private. Many by way of what is now his third Nobel Peace Prize nomination.

“Bradley Manning has made a genuine democratic act. And he has revealed that our politicians do drive a different policy than the one they went to the polls and have democratic mandate.”

In a recent interview with The Progressive Press, Icelandic MP Birgitta Jónsdóttir suggested that Private Manning was being used as an example, to scare potential future whistleblowers from exposing alleged war crimes.

“It is obvious that the government wants to use Manning as an example for what will happen to you, if you blow the whistle on war-crimes,”

Jónsdóttir states, going on to suggest that President Obama’s public condemnation of Private Manning before he’s even been tried is further evidence of the government’s intent on cracking down on dissent and whistle blowing.

Though unlikely to win the Nobel Prize, Manning and his continually evolving case remain a lightening rod in the discussion over privacy, security, transparency, war and law.