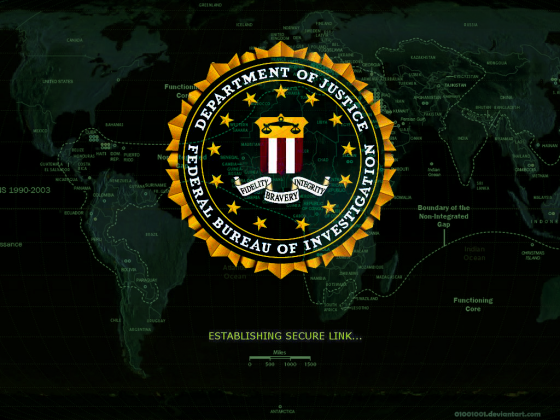 Tuesday, The Progressive Press reported on a story out of Washington state involving three “anarchist” activists, who had been detained in a federal detention center without criminal charge since September (and December respectively,) for refusing to identify and testify against area activists and their political ties.

We can now report that the two of them, Matthew Duran and Katherine Olejnik, have been released today from federal custody without charge. As reported Tuesday, Duran and Olejnik had been held in solitary confinement in the SeaTac Federal Detention Center’s Special Housing Unit (SHU) since December, as part of an effort by federal prosecutors to “coerce” testimony, purportedly regarding the 2012 “May Day” protests.

The activists were imprisoned and kept under the legal justification of “coercive imprisonment” (Shillitani v. United States, 1966). On Wednesday, District Court Judge Richard Jones ordered their release, citing the due process clause (Lambert v. Montana, 1976) which states that once imprisonment has been found to be ineffective in its coercion, individuals should be released.

Ruling in favor of the motions filed by the attorneys representing the two, a day prior to the scheduled hearing, Judge Jones writes that though the Court maintains the right to see their prison stays through end of the eighteen months as allowed by law, Olejnik and Duran’s sustained refusal to testify essentially nullifies any cause for the state to continue its attempted coercion. 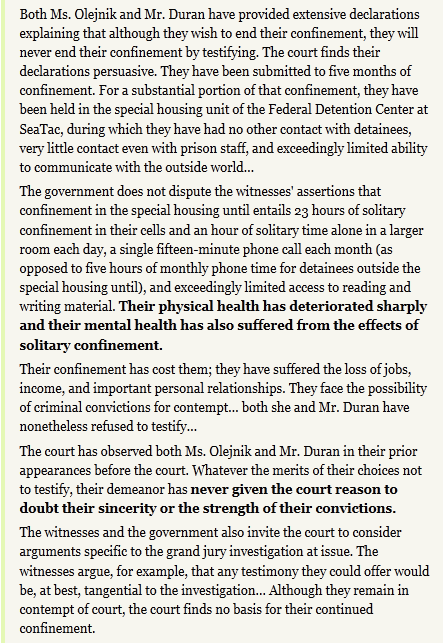 A third activist, Maddy Pfeiffer, remains in federal custody on civil contempt charges for his refusal to testify. However as reported by The Stranger, he has been transferred out of the “SHU,” and is now back in general population unit. Pfeiffer’s attorneys are also reported to have filed motions on his behalf for release, similar to those filed by attorneys representing Duran and Olejnik.

Their release, a day prior to the scheduled hearing as well as a planned demonstration by supporters of the “Grand Jury Resistors,” comes as welcome news to the civil liberties advocates and area activists, many of whom assert that the Federal investigation into the 2012 “May Day” protests was a political “witch hunt.”

On the “Pack The Court For Matt and Kteeo” Facebook event page, local supporters expressed joy at the news of their release, while some provided curious, albeit unconfirmed and unverified reports that businesses near the courthouse were readying for potential lock downs, in reaction to the anticipated protests.

Mead’s unconfirmed report of enhanced corporate security ahead of the event corresponds with the recent release by the hacktivist group Anonymous of 14 Gigabytes of Bank of America corporate security information, which they claim points to an ongoing corporate spying program, aimed at monitoring activists.

Though admitting the information released is not fully verified, communications contained within the released data strongly suggest that, amongst others, Bank of America, through use of security contractor TekSystems, has engaged in intelligence and information gathering (spying) efforts, targeting private citizens.

In a press release from Par:AnoIA, also known as the “Anonymous Intelligence Agency,” Anonymous explained the reason and relevance of the leak:

The claims by Anonymous and activists such as Mead, as well as the highly questionable “investigation” by federal authorities into the “May Day” protests which resulted in the imprisonment of the “Resistors,” are the latest developments in a growing trend of suspected federal-corporate partnerships, designed at monitoring and disrupting protestor and activist activities related to the Occupy Wall Street movement and the growing popular discontent with corporate financial banking institutions.

As reported in December by DemocracyNow, heavily redacted documents obtained by the Partnership for Civil Justice Fund under a Freedom of Information Act request show that Federal authorities colluded with banks and financial institutions to provide them with regular intelligence and information regarding OWS protests, prior to the initial demonstration even taking place.

In a 2012 interview with Democracy Now’s Amy Goodman and Juan Gonzales, Mara Verheyden-Hilliard of the Partnership for Civil Justice Fund stated that after an analysis of the released documents, she found considerable evidence suggesting the ties between the Feds and the corporate establishment go deeper than initially thought.

“The documents that we have been able to obtain show the FBI communicating with the New York Stock Exchange in August of 2011 about the upcoming Occupy demonstrations…” she stated, going on to say, “…throughout the materials, there is repeated evidence of the FBI and Department of Homeland Security, American intelligence agencies really working as a private intelligence arm for corporations, for Wall Street, for the banks, for the very entities that people were rising up to protest against.”

As questions continue to circulate regarding the true motivations behind the 2012 Federal inquiry into the “May Day” protests and the subsequent (and in the case of Pfeiffer, continued) questionings and detentions, Seattle area Occupiers and Activists are rejoicing over the liberation of Olejnik and Duran.

The last detainee still under lock and key, Pfeiffer, is now out of solitary confinement while the attorneys’ motions for release pending. Throughout social media, supporters of the Grand Jury Resistors are conveying tempered optimism regarding his detention, and vow to continue their protests and demonstrations against what they see as an increasingly autocratic corporate government.