Al-Nusra Say They are Ready to Fight Hezbullah in Syria 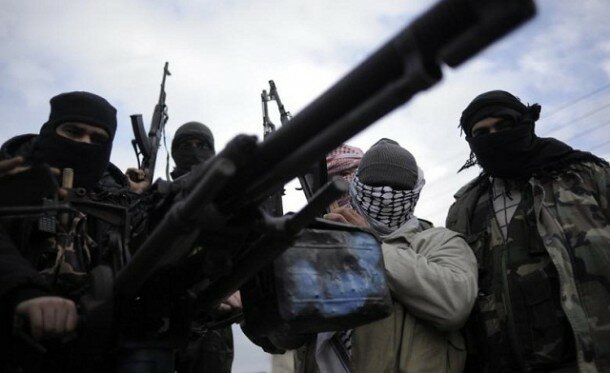 Jabhat Al-Nusra, a Sunni Muslim extremist rebel group trying to topple the regime of Bashar Al-Assad in Syria, declared that they are ready to fight Assad supporter Hezbollah.

As the Syria’s brutal two-year war drags on and it has grown more sectarian and more likely to spill over into neighboring countries. Lebanon and Iran could be pitting Hezbollah militants against Al Qaeda-linked jihadists who have flocked to Syria from across the Muslim world.

Al-Nusra, recently swore allegiance to Al Qaeda, is part of the many factions of Syrian opposition.

As reported by Progressive Press on May 13, the opposition is actually full of jihadists, from direct Al Qaeda links to its factions like Al-Nusra, as well as some Kurds and grassroots opposition activists….The list goes on and on. More formally identified are the Syrian National Council (SNC), Local Coordination Committees (LCC), Supreme Military Council (SMC) and Free Syrian Army (FSA). Each of these groups and factions are also fighting with each other.

Adding to this mixed bag of jihadists and to the current chaos, now groups based in Lebanon might be gearing up to get involved in the conflict, following the footsteps of Hezbollah. Organizations like Fatah Al-Islam, Jund Al-Sham and Osbat Al-Ansar have had bases in Lebanon for years, but they never engaged Hezbollah in direct confrontations. After the beginning of the Syrian conflict, jihadists reportedly regrouped in a new radical organization named Ain Al-Hilwe, inspired by the emergence and successful military operations of Jabhat Al-Nusra in Syria.

Hezbollah’s leader has confirmed last week that, they are already fighting Al-Nusra groups in a small scale in Syria, indicating both groups are present and armed in the country.

Syria’s conflict although often described as a “civil war,” is in fact a typical proxy war. The Alawite (an off shoot of Shia Islam) Assad regime backed up by Shia allies such as Hezbollah and Iran, as well as Russia and China.

The so-called “rebels” or the opposition groups are supported by the Islamist rulers of Saudi Arabia, Qatar and Turkey, as well as the U.S., France, Britain and others.

According to a report in NOW news site, Al-Nusra’s fight will not stay in Syria and it would move to Lebanon because their main mission is not to free Syria of its dictatorship or move to build a modern democratic state but to “ummah” which means creating a network of Muslim nations connected with religious ties.  Report says, “They do not differentiate between Hezbollah and the Shiite community just as they do not differentiate between Assad and Alawites.”

The report also claims that Al-Nusra are not organized enough to fight against Hezbollah but they could cause great damage by organizing bomb attacks and suicide bombers against Hezbollah’s bases and public squares in the southern suburbs of Beirut (Lebanon) or the South.

The United States and Russia announced earlier in the week that they will try to bring the sides in the civil war to the negotiating table before the end of the month. The announcement was welcomed by the Assad regime. AP reported that Syrian Information Minister Omran al-Zoubi said the government is willing to consider any proposals for a political solution of the conflict, while it retains the right to fight “terrorists,” the regime’s term for the opposition fighters and their supporters.

The U.S.-Russian initiative is identical to a plan, set out in Geneva last year, calls for an open-ended cease fire and the formation of a transitional government to run the country until new elections can be held.