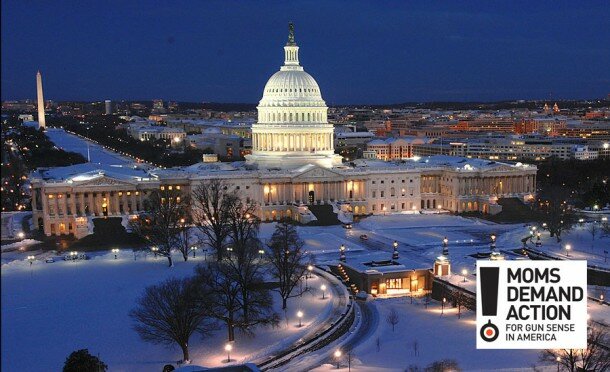 Today, April 2, between the hours of 1PM and 3PM EST, the group Moms Demand Action (MDA) is calling on anyone with access to a computer, smartphone or tablet during those hours – be they Mom, Dad, Brother, Sister, Cousin, Grandma or anyone covered by the “rational human being” label – to participate in their organized “Twitter Bomb” on the Senate. If you’ve never participated in one of these, they are extremely effective and worthwhile.

“Please Tweet your Senators as frequently as possible between the hours of 1 p.m. and 3 p.m. on Tuesday, April 2, 2013. Let them know you’re a mom, you vote, and you demand immediate action on common sense gun laws.”

Moms Demand Action, founded in the wake of the Sandy Hook massacre and unaffiliated with any organization or political party, states as its goals:

1) Ban assault weapons and ammunition magazines that hold more than 10 rounds;
2) Require background checks for all gun and ammunition purchases;
3) Report the sale of large quantities of ammunition to the ATF, and ban online sales of ammunition;
4) Make gun trafficking a federal crime with serious criminal penalties; and
5) Counter gun industry lobbyists’ efforts to weaken gun laws at the state level.

You may choose to Tweet your own Senators, or, if you’re feeling a little “activist-y” and have the time, you can blanket the entire Senate. Twitter accounts for each U.S. Senator are provided.

There is also a link to accounts for U.S. House members, however, please focus efforts first on the Senate.

Moms Demand Action has gone to great lengths to make sure this event is a success, and it is organized in the most user-friendly and efficient way. Please follow their model and adhere to the time frame.

Check for updates on our Facebook page after 3PM EST; we’ll let you all know how it went after the event and what the trends were.