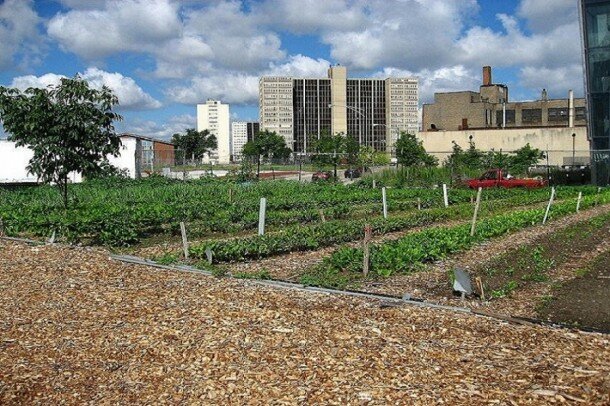 The mainstream media concentrates on the sensational and current news – obsessed with celebrity scandals, the daily fluctuations of the stock market, the deficit, and international conflicts – but under the radar is an alternative to industrial agriculture: the urban agricultural movement.

The individuals and groups opposing industrial agriculture are not picketing, organizing rallies, destroying property, suing corporations; they are putting their hands in the dirt, straining their backs, enjoying quality organic food, and creating social capital by organizing diverse informal groups or non-profit organizations to forge a new future.

In modern developed countries, we have left the growing of vegetables to industry. We go to our local mainline grocery store and buy produce (tomatoes, onions, lettuce, cucumbers, etc.) transported perhaps thousands of miles, using plastic wrapping, grown from genetically engineered seeds with extensive use of fertilizers and pesticides and excessive use of water. Crops are harvested using mechanized equipment adding additional costs and using non-renewable energy.  Some of the food is further processed into ‘junk food’ such as potato chips and into fructose which is found in many processed foods and soft drinks. Fructose has been indirectly linked with obesity, heart problems and type 2 diabetes.

Industrial agriculture has much more impact beyond the scope of this article. A documentary that is highly recommended is Food Incorporated, readily available on Netflix. I would make it a requirement for any course on introduction to environmental studies/science at the university level. It might also be suitable for high school students in social studies or geography classes. Noteworthy is an interview with the documentary’s director, Robert Kenner, on PBS.

There are numerous non-profit organization (NGO), websites, informal groups and individual in in the U.S. and around the world becoming aware of the problems with industrialized agriculture and forming the base for the urban agricultural revolution.

One such NGO is Urban Farming, which encourages the proliferation of urban farming.

The mission of Urban Farming, as stated on their website, is:

…to create an abundance of food for people in need by supporting and encouraging the establishment of gardens on unused land and space while increasing diversity, raising awareness for health and wellness, and inspiring and educating youth, adults and seniors to create an economically sustainable system to uplift communities around the globe.

The organization conducts workshops in various places around the U.S. to help people get involved in their own private efforts or come together for communal gardening.

In areas where there is not enough space for large urban farms, New York is the model, with some neighborhoods buying small lots, turning them into gardens, others growing plants on rooftops or creating greenhouses in old industrial buildings. A book (of which some portion is online), Five Borough Farm: Seeding the Future of Urban Agriculture in NYC, documents urban agriculture in New York City, its impact and speculates on its future. The online material is fascinating and certainly worth a visit.

Another example of urban farming is found in Boise, Idaho, at the Peaceful Belly Farm. It has been in operation for over ten years and grows over 100 types of certified organic vegetables. It was established by husband and wife farmers, Clay and Josie Erskine, in 2002. About a dozen volunteers assist on the farm. They have over 150 subscribers, or, ‘shareholders’, who receive a weekly amount of the food after harvesting. The cost of membership is $450. Of course, it means much more than just food for their subscribers. The membership supports a farm that: serves the community, not a large corporation; does not use genetically engineered seeds or pesticides, and, assists those that need food. Peaceful Belly food is sold at local markets and online. At the markets, they accept food stamps. They also donate over 1,000 pounds of food to a local food pantry and allow gleaming (allowing people to pick up what is left after harvesting) for low-income individuals. The farm is part of the growing movement of those involved in an informal network of Community Supported Agriculture (CSA) .

Many cities in the Rust Belt have deserted neighborhoods with abandoned homes and empty lots, and decrepit former industrial cities are finding that urban agriculture can be transformative. Cities such as Detroit (as this story’s featured image depicts), the most cited example of a declining Rust Belt city, are turning some of these sites into urban farms. Spearheading the creation of urban agriculture in Detroit is the non-profit, The Greening of Detroit. It is supported by local, state and federal agencies, corporations and foundations to assist local citizens, churches and social organization in the planting of trees, urban farming and reclaiming open space. These activities are recreating communities and creating jobs.